Last week saw the return of the House Drama competition and we enjoyed two hours of entertainment that ranged from the weird and wacky to some thought-provoking and impressive performances.

Over the course of three rounds (Monologues, Duologues and Group Pieces) each House responded to the theme of ‘Identity’. We started with Monologues and these (very brave) solo performers gave us characters including Loki and Goldilocks. Daisy C for Underwood won First Prize for this round with her hilarious rendition of ‘Mobile Madness’. 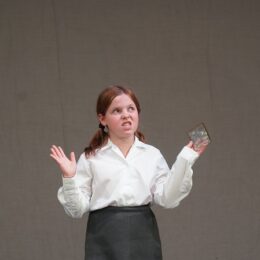 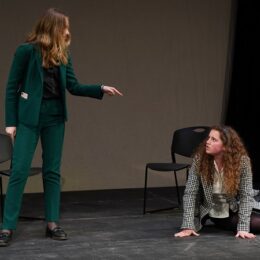 Next up were the Duologues including performances across all the year groups. To mention but a few, Namratha D and Gia A of First Year (Ridgefield) gave us an excerpt from Wuthering Heights, Olivia A and Benji C of Fifth Year (Harestone) performed the hilarious tale of a babysitter and the five year old from hell, whilst Amelie D and Liv S performed a touching piece from Colder than Here demonstrating a brilliant sense of nuance and emotion. The winners of this round were Anna D and Paige G (Lewisham) who performed snippets from the movie Mean Girls with real confidence, a sense of character and flare.

Finally we came to the Group Pieces. Each House was asked to devise a new scene (no longer than 5 minutes) around the theme of Identity. Ridgefield performed a scene called ‘I want to be a…’ with some very believable primary school characters; Aldercombe created a comedy sketch about a group of passengers having their flights cancelled; Harestone devised an elaborate tale in which our own Mr Jones assigned Mr Gabriel the secret mission of discovering which Head of House had stolen the House Budget, which was very funny; Lewisham delivered some top-notch satire in the form of a very believable Boris Johnson in the House of Commons; Newington took us on the journey of a fresh-faced First Year discovering all about Caterham School; Underwood presented a scene about forbidden love between vampires and werewolves; and the united Boarders Houses blew us all away with a striking, emotional piece about being trapped in your own identity.

Ridgefield won the Group Round, a testament to their hard work and many rehearsals in the weeks prior. Points were awarded each round for coming First, Second and Third as well as bonus points for the amount of participants in each House. We were really impressed that so many pupils got involved in House Drama this year and hope we have even more next time round!

The overall winners this year were Harestone, who did consistently well in each round with some powerful performances – as well as a brilliant Group Piece that got lots of their House members involved. Congratulations Harestone!