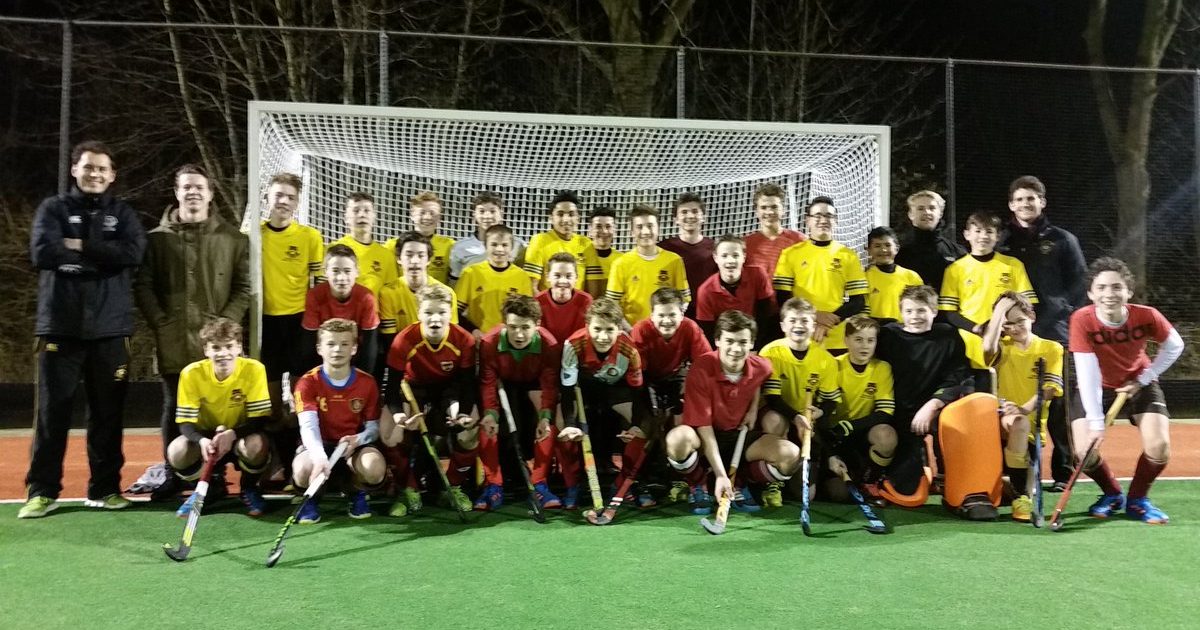 Over February half term, a group of 16 hockey players gathered at Gatwick airport for our hockey tour bound for Noordwijk, Holland. The tour was led by Mr Schenk, Mr Friend, Mr Taylor and Mr Clark. With the presence of Mr Taylor, there was inevitably going to be some muscle aching fitness sessions, and before we knew it the group was training hard, with music playing, on the foggy beach next to our accommodation.  This was followed in the evening by a group classroom session and one-on-ones with our coaches to develop players’ individual knowledge.

We spent the whole of Friday at Alecto Hockey club, Mr Schenk’s former club, training for our all-important evening game. The extended preparation proved essential, with a 2 hour morning hockey session and a 2 and a half hour afternoon session we touched upon all of the areas which needed to be covered to get us ready for the big game. Throughout the day we learned each other’s playing styles which was essential as this was the first time the group had played together.

That evening we were facing Alecto’s U14 A team, the best in their league. The game began as a very cagey affair with most of the play in the midfield area; however, Alecto gradually gained control and they pushed us to our limits. I was lucky enough to be leading the team and I’m sure my teammates will agree that the effort we put in to this game was inspirational. Each and every one of us put in 100%, from cheering our buzzword to keep our heads up to scoring 2 textbook goals (Hamish Cunningham & Isaac Salem).

A barrage of penalty corners and the constant battle of defending our D was a real test of our resolve. There were positives for Caterham though. A great save on the line from George Thomas stopped a certain goal and the occasional chance we had to attack proved to be successful. The final score was 7-2 to Alecto and although a disappointing result, a huge amount of belief could be taken from the game. Our goal keeper and Man of the Match, Dominic Wells, performed outstandingly and received compliments from the opposing teams’ coach regarding his performance.

Saturday morning brought a new challenge where we faced local team Noordwijk hockey club. It was a slow start to the game as our energy levels took time to rise but after a long first half of turnover after turnover and countless penetrations into their D, the score remained at 0-0. Mr Schenk’s typically inspirational half time words of wisdom worked, with 3 goals scored in the second half (Hamish Cunningham X2, Alan Blay) and some outstanding defence by Man of the Match Shayaan Khan. After a very tiring first two days and an early start for this match, a win of 3-2 was very much deserved.

The hard work was not finished yet as Mr Taylor still managed to squeeze in another beach fitness session but this time it consisted of a recovery run, a recovery swim in the North Sea and a great game of beach football in the sun. We finished off the day watching a movie and going bowling which was just what some needed. A solid bowling performance all around with the exception of Freddie Knox, Matt Wilmott and Shayaan Khan who couldn’t seem to muster the energy to throw the bowling ball straight.

On the final day, to top off the tour we had lunch at a traditional pancake house and Mr Schenk kindly led us on a thoroughly entertaining tour around Amsterdam. On behalf of the team I would like to say thank you Mr Schenk, Mr Friend, Mr Taylor and Mr Clark for organising the tour and I hope you enjoyed it as much as we did.