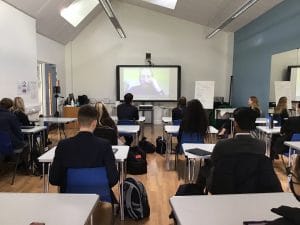 On Tuesday, Lower Sixth Form Psychologists were joined by Stefan Marianski, author and practicing psychoanalyst from The Freud Museum, London. Sigmund Freud and his work into Psychoanalysis were a key force in Psychology in the first half of the twentieth century. Whilst Psychologists do not generally consider Freud’s ideas valid nowadays, and his work is mostly taught from a historical rather than scientific perspective, it was refreshing to hear Stefan make the case for Freud’s importance in contemporary society. Stefan explained the thinking behind many of Freud’s more controversial theories, including psychosexual development and the Oedipus complex, and used examples to illustrate the principles of psychanalytic therapy. Stefan is currently working as a clinical psychanalyst with patients suffering psychosis, including schizophrenia, and he illustrated the ways in which psychoanalysis can help reduce the anxiety experienced when suffering from delusions and hallucinations. Our Lower Sixth Form pupils asked fantastic questions; challenging Stefan to respond to criticisms that Freud’s theories are not falsifiable and do not meet the criteria for science, and questioning some of Freud’s more uncanny beliefs. While Stefan may not have entirely converted the Lower Sixth Form pupils to neo-Freudians, he certainly did get them reconsidering Freud’s ideas and understanding his significant influence on Western contemporary thought.