We are delighted to start our 2017/ 18 ArtsHouse programme with an energetic, cutting edge poetry performance from Luke Wright. 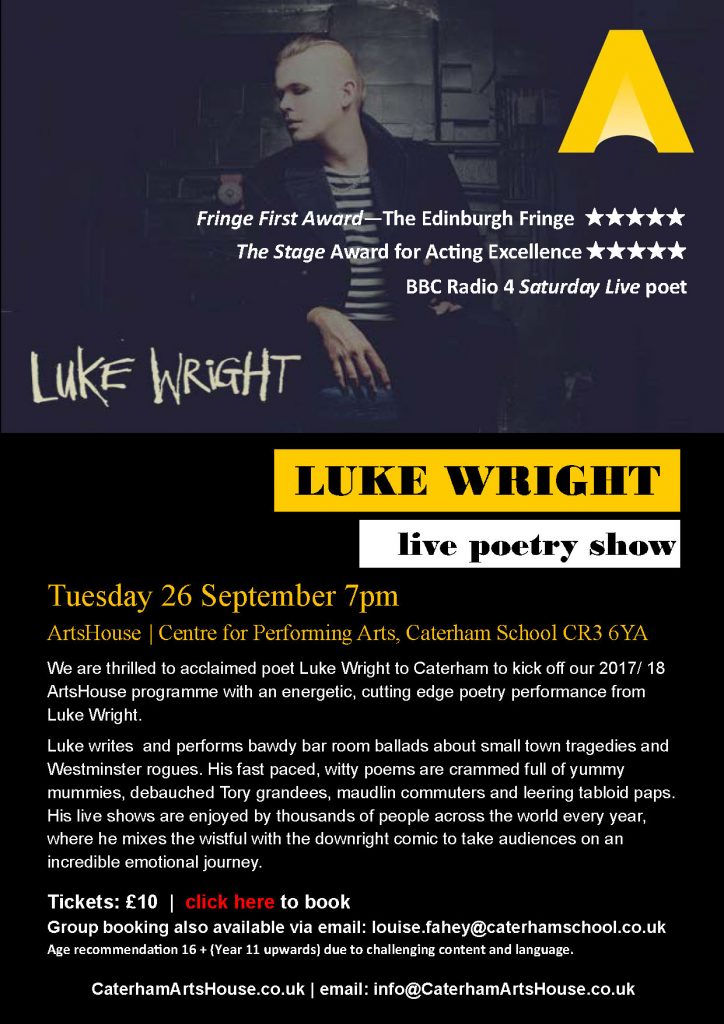 His website describes his work best – Luke Wright writes bawdy bar room ballads about small town tragedies and Westminster rogues. His fast paced, witty poems are crammed full of yummy mummies, debauched Tory grandees, maudlin commuters and leering tabloid paps. His live shows are enjoyed by thousands of people across the world every year, where he mixes the wistful with the downright comic to take audiences on an incredible emotional journey.

Since 2006 he has written and performed eight one man shows, touring them to top literary and arts festivals from Australia to Scotland via Hong Kong and Bruges.

In 2015 he won a prestigious Fringe First Award at The Edinburgh Fringe, and also bagged Luke The Stage Award for Acting Excellence. In 2016 it was nominated for an Off Westend Award and won The Saboteur Award for Best Show.

Luke’s debut collection – Mondeo Man – was published in 2013 by hip London imprint Penned in the Margins.

Alongside his own shows, Luke is John Cooper Clarke’s support act. Luke’s work has proved a hit with Clarke’s fans, playing in front of up to 2,000 people a night at venues such as The London Palladium and The Palace Theatre in Manchester.

His poems are often on the radio, generally BBC Radios 3 & 4. He is a regular contributor to the Sony Award-winning Saturday Live.

Luke hosts and co-programmes all the poetry for The Latitude Poetry Arena, one of the biggest and most popular poetry events in Europe, with over 60 poets performing for 40 hours. He is also co-founder of poetry collective Aisle16.

“His lexical acrobatics are astounding, often motor-mouthed and breathtakingly honest…Go for the wordsmithery, stay for the painful poignancy.” The List

“One of the funniest and most brilliant poets of his generation.” Johann Hari, The Independent

Luke will be performing at Caterham School on Tuesday 26 September at 7pm as a part of our ArtHouse Programme.
Age recommendation 16 + (5th year upwards) due to challenging content and language.

Tickets are priced £10 and can be booked through Wisepay.

Back to all Events