The annual Bonarjee Lecture is dedicated free speech, a free media and democracy and is held in memory of Old Caterhamian and benefactor Stephen Bonarjee. Stephen began the Radio 4 Today Programme and From Our Own Correspondent and during his time at the BBC was known as ‘the father of modern broadcasting. Click here to read more.

We are delighted to welcome John Humphrys as this year’s guest. Following introductions John will take questions from the audience.

John Humphrys has interviewed every UK Prime Minister since Margaret Thatcher. Millions of people woke up to the sound of his voice, as one of the UK’s most prominent authors, journalists and broadcasters, John has informed, entertained and inspired on The Today Programme every morning. 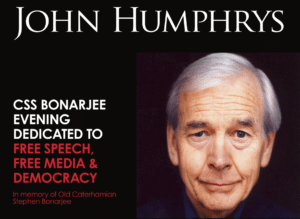 After leaving school at 15 to train as a journalist, John joined the BBC in 1966 as a foreign correspondent. This was the start of a varied and successful career with the corporation. As their first full-time US TV correspondent, covering Richard Nixon’s resignation, John made his mark, and was soon sent to South Africa to report on the fragile political situation, and then in 1980, he returned to the UK as a diplomatic correspondent, before being snapped up as lead presenter for BBC1’s Nine O’clock News, and in 1987 on Radio 4’s Today programme.

John carved a reputation for himself as a rigorous yet charming interviewer, whose informed and intelligent questioning has led to momentous breakthroughs in the British political arena, including the infamous 6.07am two-way exchange on the Iraq war with reporter Andrew Gilligan, which led to the Hutton Report in 2004, and subsequently the departures of Gillian; Director- General Greg Dyke, and chairman Gavyn Davies.

***This event is now full. However, we do often get returns on places so do please register your details for the waiting list using the form below. We will reallocate tickets as soon as they become available, on a first-come, first-served basis.***

To add your details to the waiting list please use the form below.
Back to all Events