The annual charity talent show took off in great style this year! The performers, technical crew and Upper Sixth Charity Committee (who organised the event) had a mountain to climb as preparations were hampered by snow on the preceeding Thursday and Friday. However, the result was triumphant with an impressive £4,121 raised for DKMS, Lerang’wa Lunches, St Catherine’s Hospice and the School’s Morocco project. 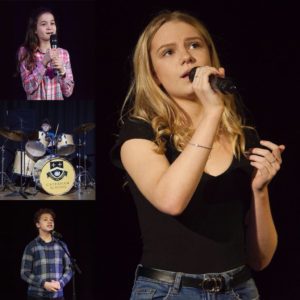 The matinee involved pupils from the Lower and Upper School and who performed a wide range of acts including drumming and gymnastics (the highest standard in memory). Congratulations to winners Penny and Hannah, who brought What is this Feeling (Loathing) from Wicked to life with their singing and acting – musical theatre at its best. Well done to all performers, thank you for your hard work making the show such a success!

The evening show involving Sixth Form performers saw a delightful array of singers and musicians with varying styles and arrangements and included another original song from last year’s winner – Ashleigh. The winner was (magic) Michael who has honed his skills over the years as a talent show stalwart, winning the matinee last year and enthralling the crowd this year to a magnificent display of magic, complemented by pace, patter and stagecraft. Thank you all performers who made such an effort and made the show so enjoyable for the sell-out audience.

Following the traditional staff dance curtain raiser, the boys v girls dance-off was conducted in great spirit with over 100 pupils involved. Both dances were of a very high standard and great entertainment for the audience and participants alike.