Vice-Chancellor of The University of Buckingham

Sir Anthony Seldon, Vice-Chancellor of The University of Buckingham since 2015, is one of Britain’s leading contemporary historians, educationalists, commentators and political authors.

He was a transformative head for 20 years, rst of Brighton College and then Wellington College. He is author or editor of over 35 books on contemporary history, including the inside books on

the last four Prime Ministers, was the co-founder and rst director of the Institute for Contemporary British History, is co-founder of Action for Happiness, honorary historical adviser to 10 Downing Street, UK Special Representative for Saudi Education, a member of the Government’s First World War Culture Committee, was chair of the Comment Awards, is a director of the Royal Shakespeare Company, the President of IPEN, (International Positive Education Network), Chair of the National Archives Trust, is patron or on the board of

several charities, founder of the Via Sacra Western Front Walk, and was executive producer of the lm Journey’s End. He appeared on the Desert Island Discs in 2016. For the last fteen years he has given all his money from writing and lecturing to charity. He has three children; his wife of 34 years, Joanna, died of cancer in December 2016.

Dr Clark-Wilson leads the team of researchers on the UCL EDUCATE programme who provide research training and mentoring to over 200 London-based EdTech start-ups to help them learn how to use research evidence to inform the design, implementation and evaluation of their products and services. A former Advanced Skills Mathematics teacher and teacher educator, Dr Clark-Wilson has been actively involved in EdTech since the late 1990s to include the design of multiple professional development initiatives for teachers in the UK and internationally. A regular adviser to governments at home and abroad, Dr Clark-Wilson is empathetic to the needs of policy makers, curriculum designers, examination boards, publishers, industry, schools, parents and, of course teachers and learners as they all grapple with the human challenge to stay abreast of educational technology innovations!

Gi is an engineer, entrepreneur and investor, who founded Freeformers in 2012 having previously built successful technology businesses, including Techlightenment (sold to Experian Plc). The father-of-three received an MBE in the New Year Honours 2017 for services to the Digital Economy. A thought-leader on the Future of Work, Behavioural Change and the impact of Automation and AI on employment and society, Gi holds positions on various boards including Apps for Good, Duke of York IDEA and Craft.co. He is an adviser to the Institute For The Future of Work and adviser to the Institute for Ethical AI in Education. He also invests in innovative startups such as Technology Will Save Us, BookingBug, Citymapper and Playmob. In September 2017, Gi was named Entrepreneur of the Year at the Asian Achievers Awards. He is co-author of the book People Centered Economy with Vint Cerf (co-inventor of the internet) and David Nordfors (Stanford Centre for Journalism).

Roy leads Accenture’s Insurance Strategy practice in the UK & Ireland.  He is also a key driver for Accenture’s Digital, Innovation and Transformation agenda across the UK and Ireland.

He launched and is responsible for the Digital Insurance Solution Centre (DISC) which is designed to offer Insurers a controlled environment where they can rapidly “test and learn” concepts and ideas within the changing digital environment – focusing on a set of leading edge technologies and accelerators.  This capability started in the UK and now expands across Europe and North America – including wider ecosystem Integrations (Open Banking, FinTech / InsurTech, and Platforms).

He is Sponsor and Lead for Accenture’s InsurTech Global Workstream which is part of Accenture’s FinTech Labs – an Innovative Start-Up Accelerator Programme – operationalised in London, New York and Hong-Kong.

Where: Caterham School, Caterham CR3 6YA

We stand on the brink of a technological revolution that will fundamentally alter the way we live, work, and relate to one another. In its scale, scope, and complexity, the transformation will be unlike anything humankind has experienced before.  Klaus Schwab, Executive Chairman, World Economic Forum 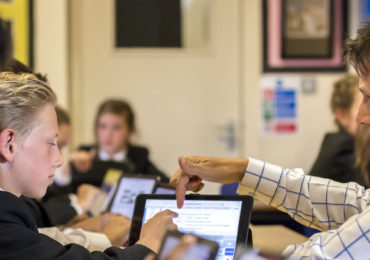 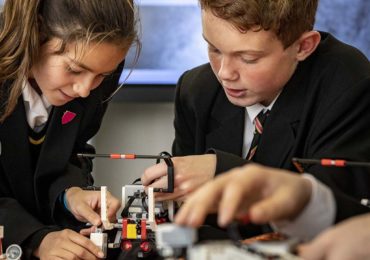