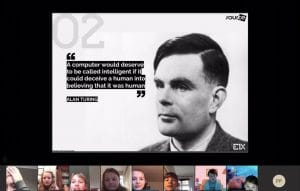 In Maths this week, to celebrate LGBTQ+ History Month, First to Third Year pupils have been remembering Alan Turing, one of the 20th century’s most important mathematicians, by cracking substitution codes! Turing worked at Bletchley Park during WW2 where he designed the famous Bombe machine which led to the cracking of the German Enigma Code and helped the Allied forces win the war. His work also paved the way for the creation of the first ever computer and he is known as the Father of modern-day computer science.

Turing lived at a time in Britain when to be gay was a criminal offence and he was tried with ‘gross indecency’ in 1952, over 40 years before his work at Bletchley Park would be declassified and the world would find out about the significant impact, he, and many others, had on the war. After pleading guilty and accepting probation with a course of hormonal treatment, he sadly decided to end his life in 1954 at just 41 years old.

In 2009, a British programmer set up a petition asking the British government to apologise for Turing’s treatment which received over 30,000 signatures. Gordon Brown, the then prime minister, apologised and described the treatment of Turing as appalling. However, the conviction still stood and ultimately Turing, as well as every other man charged with gross indecency and other similar offences, was still guilty of being gay.

In 2014, Queen Elizabeth II pardoned Turing, making his only the fourth royal pardon since WW2, but it took until 2017 for the government to retroactively exonerate all men who were convicted of similar historical offences. This law is informally known as the ‘Alan Turing law’. The fact that this law was only passed three years ago is a stark reminder of the challenges that people in the LGBTQ+ community have faced in Britain and still face in many countries across the world today.

Later this year, you will be able to see Alan Turing on the new £50 note. He was chosen for his outstanding contribution to mathematics and computer science and the huge impact he had on how we live today.