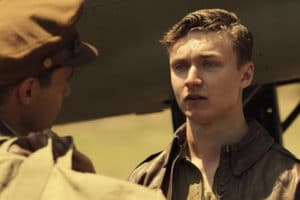 Catch-22, the 1961 novel by Joseph Heller, considered one of the most influential books of the 20th century, famously adapted in director Mike Nichols’s 1970 film, is revived as a 6-episode TV mini-series. Harrison’s character, Snowden, is a tail gunner who does not know what awaits him on his first mission.

Harrison made his feature debut in Spider-Man: Homecoming and Avengers: Infinity War for uncredited roles. He will be playing Farnbranch Man in the upcoming film Chaos Walking adapted from the Patrick Ness novel.