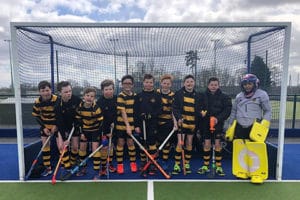 It has been a great week for Caterham hockey with both the U12s and U15s competing in the Surrey Schools cup.

The U12s got off to a promising start in their tournament at Reigate School with victories against Barrow Hill (2-0) and Parkside (1-0) – and the score lines could have been even bigger.

This set the boys up well for their encounter with Reigate in a winner takes all match to top the group. It was a fiercely fought game that went right down to the wire. With chances going begging the game finished 0-0 meaning we finished second in the group on goal difference. In the semi-finals we faced a strong St Georges team and despite a gutsy performance from the boys they lost to the eventual winners 3-0. Now we were battling for third place. By minimising the opposition’s attacks we began to dominate the game but we were unable to capitalise. It was to be settled on penalty flicks. With some superb saves and powerful flicks the boys won 4-3. A fantastic achievement!