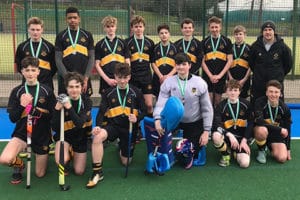 The U15s travelled to Reeds School for their competition. They dominated the group stages and convincing victories over Reigate and Lingfield and a draw against Kingston Grammar School (KGS) put Caterham top of the group. The semi-final against Trinity was a hard- fought contest. The boys showed huge heart – a strong defence and some quick counter- attacks earned the team a well-deserved draw. A place in the final was to be decided by penalty flicks. The boy held their nerve – two fantastic saves and flicks taken calmly and with purpose meant Caterham would compete in the final against KGS for a second time that day. The game was end-to-end with both sides dominating periods of play. Caterham’s 1-0 lead at half time was quickly lost as KGS scored with their first attack of the second half. The deadlock couldn’t be broken and the game was decided by penalty flicks once again. Unfortunately this time it wasn’t meant to be and with two flicks just going wide of the post the team came second. A superb achievement after a fantastic day of hockey!