Welcome to the Lower Sixth Form pupils recently appointed to the Sixth Form Council! The Sixth Form council reps meet weekly. Their purpose is to facilitate communication between the Sixth Form pupils and the Sixth Form Management Team but more importantly, their contributions help to shape and improve the overall achievement of Sixth Formers so they have an enjoyable and varied experience, fully taking part in the ambitious and vibrant Sixth Form that we want to be here at Caterham School.

They represent the views of all pupils in an inclusive and community minded spirit. They routinely raise matters of interest, initiate new ideas linked to Sixth Form life in wellbeing and academic areas. In the first half term they have, for instance, helped with suggestions on how to best use study areas around the school and how to be ambitious and efficient as a Sixth Form pupil during study periods. They have also supported and facilitated celebrations of religious festivals for fellow pupils. They are looking at the best way to raise awareness about litter in the Sixth Form common room liaising with various management teams at school. 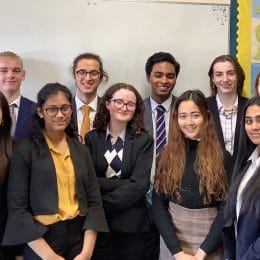