80 Years of Cadet Forces at Caterham

The CCF (and its forebear) celebrated 80 years at Caterham School on 5 February 2021.

In the dark days of the Second World War, an Air Training Corps (ATC) unit was established at the school by a Royal Warrant from King George VI on 5 February 1941.

574 (Caterham) Squadron of the ATC was formed of a village flight and a school flight to which J A Wenden (Chemistry master) and W N Maddock (Physics) offered their services as CO and 2 i/c respectively. A ditty was apparently popular in the village during the ‘40s:

Across the road from Caterham School

Well, did not Mr Churchill say

“We’ll fight them on the Beeches”?

In time, the village flight dwindled and the school flight grew into a full Squadron in 1946. These post-war years saw the building of a Squadron HQ on the site of the current Sports Centre in 1952. It was badly damaged and subsequently demolished due the Great Storm of 1987.

During the tenure of Headmaster S R Smith, it was decided to widen the cadet experience at Caterham to provide an Army as well as a Royal Air Force presence.  On 1 October 1980, 574 (Caterham School) Sqn of the ATC closed and Caterham School Combined Cadet Force (CCF) formed (locally known as Corps). To this day our Unit Recognition Badge acknowledges its forebear as ‘574’ is prominently displayed.

The Army Section was sponsored by the Queen’s Regiment (later to become the Princess of Wales’s Royal Regiment). Lots of extra kit started to arrive and in time a new HQ was established within the heart of the school at its current location underneath Rudd Hall.

From small beginnings – just six cadets at one stage – Corps has grown to be the largest voluntary co-curricular activity in the school, with 200 cadets and 10 staff currently on the books. Over the years, Corps has imbued many young men and women with its values – courage, commitment and friendship – and the skills of leadership, teamwork and self-reliance. The opportunities provided through both military and non-military activities foster the spirit of adventure and resilience.

Some cadets choose to follow the example of J F G Smith, the first cadet to join the Armed Forces (RAF) in 1942, and many ex-cadets continue to serve in HM Forces today. Most do not, of course, but Corps leaves its mark, be it in school, where cadets regularly feature in the cohorts of Prefects and Heads of School, or in life beyond. That there are at present four Old Caterhamians among the unit’s officers says something of the long affection which Corps inspires in its members.

Corps’ first camp was at RAF Kenley in 1942. Since then, as in so many ways, our horizons have continued to broaden. Eight decades on, a Caterham cadet can expect dozens of camps in his time with us across the UK, caving in Devon or flying in Scotland or shooting in Wales. And overseas too – Germany, Cyprus and Gibraltar have all hosted hundreds of enthusiastic cadets in recent years. 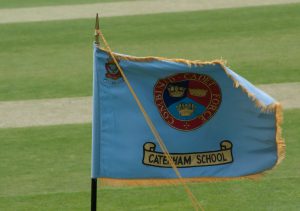 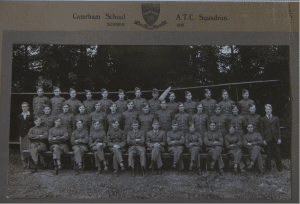 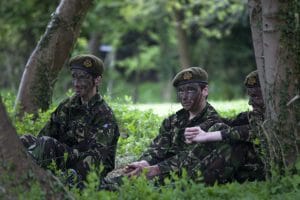