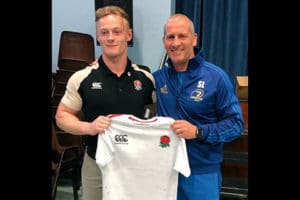 We are extremely proud of Sixth Form pupils Jude and Tyler who have both represented their country and donned rugby shirts over the past few weeks.
Tyler capped off a brilliant schoolboy rugby career by representing England U18 Counties. Tyler played in the squad that were beaten on Wednesday by Ireland 17-30 but there is a rematch tomorrow (Saturday) so hopefully the England team will be victorious in that one
Jude was selected for England U18s and received his cap from England and Gloucester fly half Danny Cipriani.
Jude scored two tries for England U18 against Ireland at last Wednesday’s match!  England led 17-10 at the break with two tries from Jude and seven points via Orlando Bailey
Second half converted tries from Phil Cokanasiga and Oisin McCormack took the score to 24-17 and despite late Ireland pressure, England held on for victory.
Jude sparked the game into life, latching onto a loose ball inside his own half before searing down the left wing, kicking ahead of the Ireland full back and touching down for a fine individual score. To read the full match report: https://bit.ly/2GkjkmK