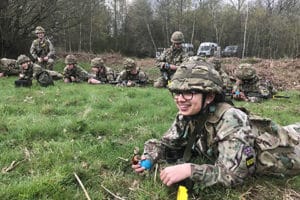 In response to intelligence that a foreign power was operating out of the Home Counties, a platoon of the CCF deployed to Bramley Training Areas in Hampshire. First it liaised with a special forces detachment, training in CQB lanes, grenade throwing and section tactics. As the afternoon wore on, the cadets advanced to a harbour area and soon began to dominate the ground. The enemy was driven from huts, pillboxes, tunnels and fortified positions in a string of fighting patrols, before a devastating midnight ambush on a vehicle convoy seemed to have ripped the heart out of its pitiful resistance. But after a few hours’ sleep ‘stand to’ was called with reports that a small but die-hard faction was active again. A downed helicopter was found and some straggling enemy put to flight, before a massive platoon assault on a fortified compound saw the cadets’ TIBUA skills end once and for all the threat to British interests. The cadets who braved these exhausting two days, many of them recruits exercising for the first time, performed admirably and have a sense of pride and satisfaction to take home in place of the decoration for valour they surely deserve.