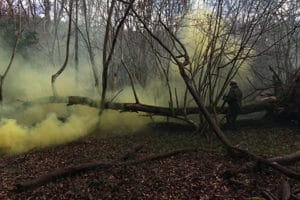 On Sunday 17 March, Caterham School CCF staged the annual Exercise Caterham Laser. 33 cadets from across the Third, Fourth and Fifth Years practised their survival skills in the School’s woodland and learnt how to build a fire, prepare fish, collect rain water and find shelter. For the second half of the day, the cadets put their tactical skills to the test and competed against each other in a series of laser-weapon war-games. A great day was had by all!