The Fourth Year Duke of Edinburgh expedition party headed out to the Chiltern Hills on the morning of Thursday 26 May, ready for three days’ worth of thrilling rural route planning and hiking.

After meeting at the front of school in the early hours of that Thursday, the expeditioners loaded their bags onto three buses, with the main challenge being “finding the right bus.”  The M25 was mostly cooperative with its traffic, apart from the final few miles before the M40, during which we came to a brief standstill and had to watch a succession of vehicles passing us in the next lane.  A short while later, we headed down a narrow country road and arrived at our expedition launch pad, where we met our assessors from Adventure Expeditions, a firm that specialises in hosting and assessing D of E activities. 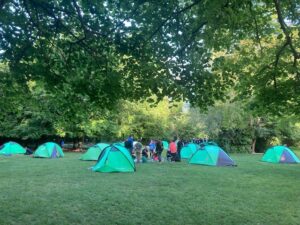 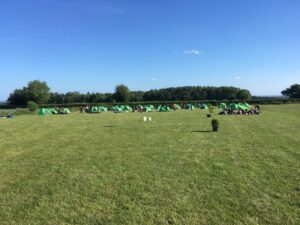 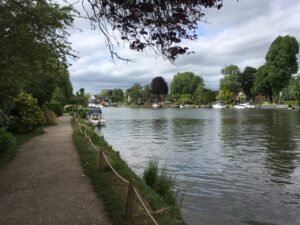 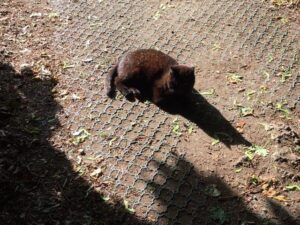 The assessors briefed the expeditioners on “the rules of the route,” including the Country Code (not to mention how to pack a fully stocked D of E bag), and then the teams headed off.  Meanwhile, Mr Wilkinson and the rest of the Caterham trip staff set sail for a few more junctions up the M40 so that we could set up camp at the campsite end point for the day’s route.  After a quick lunch, several of us walked along the route (from the finishing line), surveying the unrivalled natural beauty of the Thames Valley path in and near Bourne End and Marlow.  When we encountered an increasing selection of teams at various places on the route, we tried and failed to remain inconspicuous.

In the evening, having been debriefed by their assessors and installed their tents, the teams undertook another of the great D of E rites of passage: cooking their first evening meal of the expedition.  There was some memorable confusion about where to find the water refill station, and some unforgettable confusion about how the tap worked at one water refill station, but we all ate very well.  We all remarked that the busy road near the campsite was unlikely to fall silent at any point during the night but being the outdoor-minded expeditioners that we are, we did not let that faze us.  Atlanta, an adorable black cat who frequently visits the campsite, walked over and greeted us just after nightfall, and then she waved us off the following morning.

Friday 27 and Saturday 28 May included lots more walking, cooking and camping.  The Friday campsite was trickier to find than the Thursday one, but once we knew where the correct field was, we were able to set up in good time.  Several teams, however, initially got the wrong impression about which gate would lead into the correct field, and after finding their initial gate closed, they had to double back and walk another hundred metres down the road.  This could have been a hefty “Fieldgate Scandal,” but the teams took the diversion in their strides.

The Friday evening, after dinner (during which the staff cooked a terrific curry, albeit one that included some staggeringly hot chilli, which left its mark for several minutes), some of the teams joined forces for a series of cricket and rounders matches.  The camaraderie at these matches was top notch, and they really illustrated the priceless value of the friendships between the teams.  D of E expeditions, as exposing and self-guided as they are, have always been among the best platform for highlighting friendships and great citizenship.

The Saturday expedition concluded with a lunch on a village green, followed by a walk to a slightly dilapidated coach pick-up point (the pick-up point was dilapidated, not the coaches).  Miss Dawrant and I had to draw on our considerable experience as Refectory lunch queue duty staff to make sure that the coach queues were unambiguous and that the assessors had all the opportunities that they needed to complete their final sign-offs.  The first few teams through the queue boarded Coach 1, which reshuffled the coach passenger lists, and then we headed back to Caterham in an impressively quick time via mostly clear motorways.  After our return, I bid the teams “farewell” by encouraging them to savour this magical landmark moment of having completed their silver expeditions.

Thank you so much to everyone who was involved in the expedition.  Those three days were a perfect representation of the “be yourself, be a model citizen, challenge yourself” ethos that underpins the Duke of Edinburgh scheme.