In December 2019, Senior House Chess was a thrilling wintry event.  On 10 May 2022, it returned to the Caterham calendar for the first time since that chilly day, and the summery mood made for a very welcome and very exciting return. 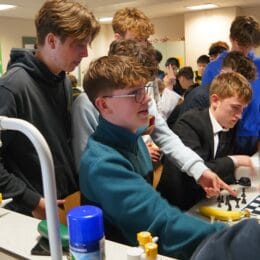 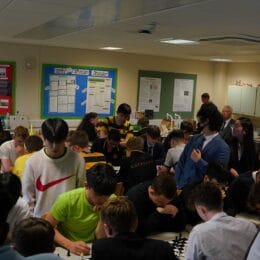 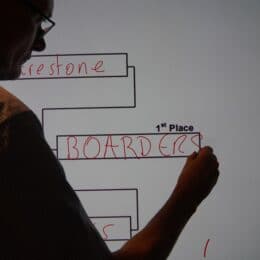 The chess players (many of whom had never taken part in House Chess before) headed up to B1 at the start of lunchtime, ready to sort themselves into Houses and decide who would be playing at which boards.  Mr Quinton introduced chess as being the ultimate game of strategy and the only game in the world that is 0% luck (both of which are great reasons why everyone should play this timeless game), and then The Draw was held, which decided who would be playing whom in the first round.  I hyped this up as much as I could, as befits a decisive lottery, and the players took their places in B3 once the match-ups had been decided (and after they had picked up their lunches; we are very grateful to the catering team for providing these for us).

Playing with five minutes per player per game, and under the touch-and-move rule (which has been the downfall of many overly hasty chess players in the past), everyone rose to the occasion and produced some thrilling battles.  Some contestants won their games because their opponents ran out of time, but others won with brilliant checkmates, including one interesting checkmate on square f7 with a white bishop supported by a knight.  This left Newington, Aldercombe, Harestone and the Boarders facing off for the top four places in the competition.

In some very tightly-fought semi-finals, Harestone narrowly defeated Aldercombe, while the Boarders saw off Newington, setting up the third place playoff and final.  The Boarders maintained their reputation as the Caterham chess champions, but Harestone superbly won the marquee “Board One” match in the final, with Will (Upper Sixth) storming to a hard-won victory – apparently unbothered by all the spectators that this match had acquired!  Meanwhile, Aldercombe narrowly took third place.

Mr Quinton and I would like to thank all the players for taking the opportunity to spend their lunchtimes demonstrating the power of chess and the indomitability (a great adjective that will be familiar to many Doctor Who fans) of our House spirit.  Thanks are also due to Mr Jones (English Dept), Mrs Drummond, and the Heads of House, for their stirring encouragement for the players.  Here’s to an excellent year ahead in Caterham chess!