Caterham’s Mili  (Fourth Year) has enjoyed a successful summer with the highlight undoubtedly being her victory at the West Byfleet Junior Open (Under 18), a Daily Telegraph Junior Championship qualifying event.

Mili’s handicap has reduced from 21 to 12.5 due to good showings at both club (Walton Heath) and county level leading to her qualification again for the ‘Race to the Stars’ Surrey Rookie Tour finals (Under 14) being held at Kingswood Golf Club on Sunday 29 September. This is for the leading six players in Surrey through various categories both boys and girls.

Throughout the summer period Mili has been a regular in her clubs Junior side (mixed) playing in events at places such as St.Georges Hill, Royal Wimbledon and West Sussex with the team reaching the quarter finals of the county club competition for under 14’s yesterday – sadly the team lost but during the competition Mili only recorded one lost match. 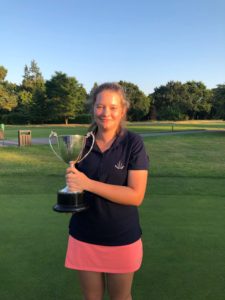