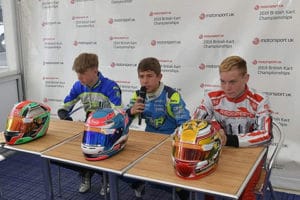 Last weekend, Ollie (Third Year) took part in the British Championships in which 40 of Europe’s best drivers compete. Ollie successfully won the race which now places him second in the UK championship. And, only three weeks ago Ollie took part in round two of the Euro Championships. Hopes were high but a few, long days culminated in his chain snapping in the pre-final where he had started third. The chain failure meant he had to start the final flat last of 34 karts (there were 54 drivers total with the top 34 making the pre-final and final). After shaking off the disappointment he drove extremely well making up 30 places to finish fourth with easily the most places made up across all 40+ races over the four days. Ollie is now placed third in Europe – so a very successful few weeks. Well done Ollie!