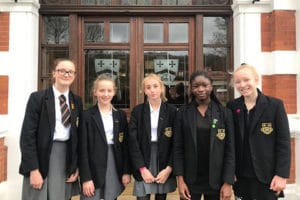 The U18 Super County Final was held up in York at Queen Margret’s school. 1st XII team member Mai travelled up to participate with her team that was coached by Old Cat, Pippa. Having won all the groups games, they advanced to the quarterfinals where they just narrowly missed out, losing 3-4. Congratulations to all of these pupils on a fantastic achievement. You have represented Caterham Sport and Caterham lacrosse well! We are proud of you!