On Friday 8 March, 10 swimmers took part in the annual National Bath Cup. With potentially one of the strongest female teams the school has ever had, it was always going to be exciting.

The first race was the 4 x 50 Freestyle Relay for Girls; after a solid heat swim the girls went into the main final ranked third. Later on in that very final all the girls improved on their morning swims to take home Caterham’s first ever National Bath Cup Medal. The freestyle team consisted of Laura (Lower Sixth) Jess (First Year), Izzy (Lower Sixth), & Amy (Lower Sixth).

The second race of the event was the 4 x 100 Freestyle Relay for Boys; all four boys stepped up to the mark and despite being ranked rather low we managed to dramatically improve our overall ranking by 10 places. Competing for our boys team were Rob (5N1), Caiden (2S), Seb (5U2), Louis (5A1).

Competing for our boys’ team were Rob, Seb and Louis (Fifth Year) and Caiden (Second Year).

Starting us off was the 4 x 50 Medley Relay for Girls; once again they all performed superbly, qualifying for the final in second place. However, it was noticeable that a few of the big teams had rested swimmers so the final was going to be extremely tough. 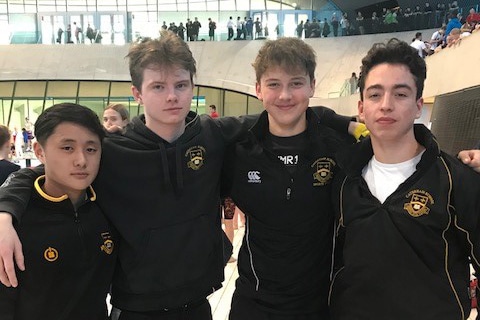 Backing up a superb heat swim by the girls it was then time for the 4 x 50 Medley Relay for boys. Posting a rather unexpected time, and slightly quicker than the girls, the boys’ team consisted of Caiden (2S), Seb (5U2), Max (5H) & Rob (5N1). Caiden (Second Year) and Seb, Max and Rob (Fifth Year).

Had we been eligible for the B final, our boys would have secured a place; however, they came away from the event looking to build upon the large steps forward they have made over the last few months and want to come back next year to improve on what was posted this year.

On to our last race of the event and it was the final of the Girls 4 x 50 Medley Relay.

Some of the schools had rested swimmers to keep them fresh for the final but that did not seem to hinder the Caterham girls. With a fine all-round performance the girls managed to get over the line with another bronze medal to complete a fantastic day for Caterham swimming! The Medley team consisted of Laura (L6R2), Ava (2W), Izzy (L6R2) & Amy (L6R1).

We are proud of how all the swimmers performed and remained professional throughout the entire day.

Congratulations to all the teams and a special mention to the five girls who have made Caterham School history!