Nathan B named in England U19 Squad 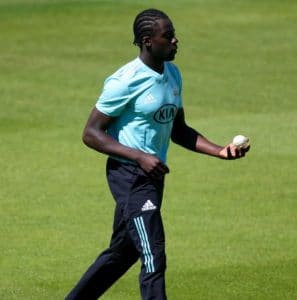 Surrey Academy fast bowler Nathan B has been named in the 18 strong England U19s squad for the upcoming Royal London ODI series with the West Indies.

Following an outstanding season at Caterham, he has continued his excellent form during the summer with Surrey 2nd XI, Academy and U18s. He has now been rewarded with selection for England U19s for the series against the West Indies. Nathan has played in two of the first three one day internationals, taking 3-30 in the latest match.

Earlier in the summer, Nathan also featured for London & South East in the ECB Super Fours competition that pits each region’s best youngsters against each other across one week of competition.

This is the first time the U19 team has been in action since the 2020 ICC U19 Cricket World Cup, and the squad, selected by the Young Lions selectors, will be led for the first time by ECB Elite Pathway Coach, Richard Dawson.

Also featuring over the summer for Surrey has been Callum N (Fifth Year) who has been playing regularly for Surrey U15s.