Pia in Fifth Year, a highly talented and enthusiastic Latinist, heard this week that she had been chosen among a small handful of runners-up for a national Classics prize.

The competition, run by the Antigone Journal, asked entrants to compose “Emails to the Ancients”: polite, witty and fanciful notes to figures of ancient mythology, literature or history. Pia decided to write to the emperor Nero as an outraged member of the IOC, chastising him savagely for his controversial participation of the Olympic Games in AD 67. His victories, secured in no small part by bribery and intimidation, were annulled soon after his death, but Pia wanted to tell the emperor directly that his conduct breached the Olympic code and would not be tolerated.

To be chosen by an illustrious judging panel, which included Cambridge don and TV regular Prof Dame Mary Beard, as a runner-up in the U18 category despite being only 15 years old is a great honour and a testament to Pia’s devotion to all things classical. She has since taken her research further, writing a superb independent research prize essay on Nero’s use of games and spectacle.

You can see her email below, and full details at the Antigone website.

Well done, Pia! Let us know what Nero says in his reply … 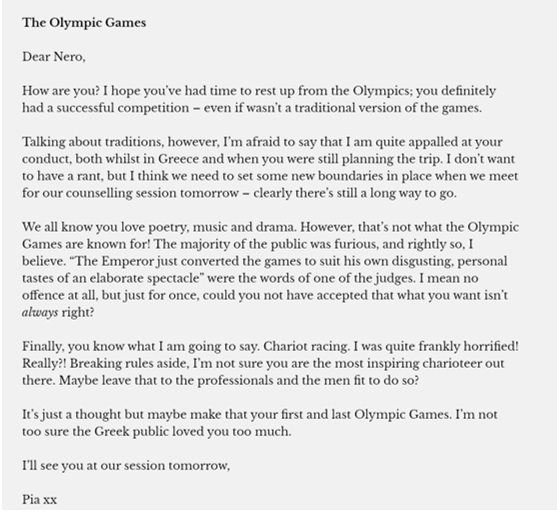