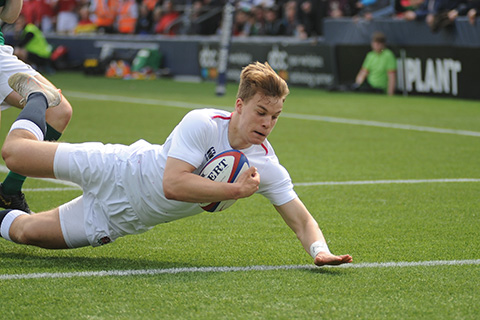 Congratulations to Jude Williams who has signed a professional contract with Wasps RFC. Becoming part of the Wasps Senior Academy rounds off an incredible 12 months for Jude. Having been released by Harlequins, a professional rugby career looked out of reach but following an exceptional start to the season playing at full back for the Caterham 1st XV, his scintillating form caught the eye of Wasps. He was soon invited into their U18 fold with trips up and down to Coventry becoming more and more regular and he continued to impress them more and more. Those in high places had noticed that things were going so well for him at Wasps and at the end of the season Jude was asked to join an England U18 training squad. When the squad was whittled down, Jude was still there and he ended up representing his country in the U18 Six Nations scoring superb tries against Ireland and France. What a year! Well done Jude. All of your achievements are reward for the hard work and dedication that you have shown.