Sixth Form French pupils had an exciting trip to London this week, exploring South Kensington “à la française”, soaking up the very French atmosphere of this part of London. The mini tour started with a stop at Le Lycée Français, site of the French Résistance’s Head Quarters during WW2, a topic they are studying as part of the A level course. We spent some time at the bookshop “la librairie La Page”, browsing French latest titles, comics and stationery. We then finished our tour at the Institut Français to watch “Les diaboliques” a timeless French classic movie which, well before Hitchcock’s “Psycho” raised the psychological thriller to a new, horrific level. This “chef d’oeuvre” by talented director, Henri-Georges Clouzot had everyone truly engaged until the end and that ingenious twist but “chut, c’est un secret!”. 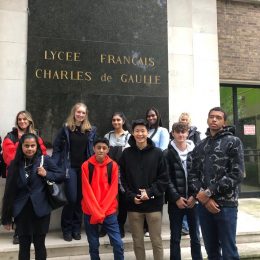