Having qualified for the final in the regional event in April, the Caterham team of top Philosophers were excited to take part in this much anticipated event.  This is the first time that Caterham has ever entered this competition, so we were thrilled to get to this point.  Four pupils represented the school in the final on Wednesday, right in the middle of exam week!  However, the pupils sat their exam in the morning and then prepared for their matches.  This time they discussed some really topical issues; questions surrounding who should be prioritised for COVID vaccines, whether statues of slave traders like Edward Colston should be removed and finally whether fines for offences such as speeding should be relative to offenders’ income?  Ananya, Emma, Louie and Tiffany all in the Lower Sixth Form, presented their arguments in a calm, clear, intelligent and logical way often drawing on knowledge from other subjects they study like politics, history and economics.  They asked perceptive questions to the opposing side and responded to some tough questions from the judges.  Despite each match being incredibly close, they did not make it to the semi-finals, however, they do leave the competition as one of the top 10 teams in the country. This in itself is a fantastic achievement, but I believe that the skills that they have developed as a result, is what will stay with them.  They appreciate, how the subjects they study, do not exist in isolation but can work together to solve challenging issues and that collaboration with other critical voices can be an excellent way of striving for the best possible answer to complex questions. 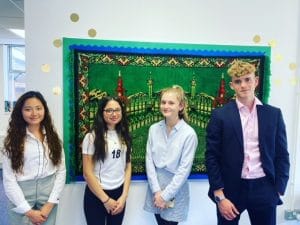