Click here to visit our Music Department pages, with details of forthcoming concerts, reviews and information about our ensembles.

The Chinese philosopher Confucius said that “Music produces a kind of pleasure which human nature cannot do without”. Apart from the joy that playing a musical instrument brings to those who play and everyone around them, there are other benefits that might not immediately come to mind.

For example, reading music requires the counting of notes and rhythms and musical theory includes many mathematical aspects. Studies have shown that playing an instrument can improve mathematical ability. Research has also shown that both listening to music and playing an instrument can stimulate the brain, increase memory and can actually increase IQ by up to seven points. The respiratory system is improved – learning how to expel air properly to make the desired sound is an integral part of playing wind and brass instruments. Team skills are a very important aspect of being successful in life. In order for a group or ensemble to make beautiful music, each player and section must learn how to listen to each other and play together. Learning to play an instrument takes time and effort. All musicians have to practise and therefore they have to learn patience and perseverance.

We are proud of a music department where anything is possible and where students are able to express themselves in a positive and enriching way.

the study of music

Music is an academic subject that explores a broad and diverse range of different styles of music.  At Caterham School, music is taught to all pupils until the end of the Second Year.  In the Third Year, academic music becomes an elective subject and it is a very popular choice.

Throughout the curriculum, from First Year up to pupils who study music at A Level, pupils will develop a broad understanding of a range of musical styles and traditions so that they can form their own opinions on music.  Pupils explore the three core musical skills: performing, composing, and appraising music.

Pupils in the First and Second Year are taught in mixed-ability classes and they focus on a range of different styles and genres of music across the two-year curriculum.  Throughout this time, pupils develop a curiosity about music and learn the relevant knowledge and skills so that they can formulate their own opinions and learn how to justify opinions by using musical vocabulary.

In the Third Year, pupils choose to continue music.  There are a mixture of skills and genres of music that pupils learn about and this year is used as a bridge in preparation for GCSE.

Some topics that pupils explore are:

Pupils currently follow the Edexcel 9-1 GCSE course which focuses on developing pupils’ understanding of music as well as allowing them to develop their performing and composing skills.

The weighting of the specification is as follows:

Throughout the two-year course, pupils will learn how to analyse a range of set works from Areas of Study.  Through this, they will develop a broad awareness of the styles and historical, social, and cultural contexts for which they were composed.

Pupils currently follow the Edexcel A Level course which is an exciting and broad specification.  There are eighteen set works from six Areas of Study which allow pupils to explore a vast range of different genres and musical traditions.  Pupils prepare for an eight-minute recital and will compose two pieces: one of free choice/to a brief and the other a composition that demonstrates a specific musical technique (e.g. Bach Chorale, arrangement, Baroque counterpoint).

The weighting of the specification is as follows:

Back to Academic Departments 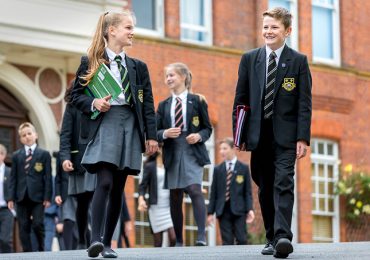