Hockey is thriving at Caterham and is augmented by our Hockey Academy. It is the main sport for boys in the Spring term with field training taking place twice a week, building to three times a week in the Fifth Year and the Sixth Form.

Outside of the main boys’ hockey term, during the autumn term, there are indoor training sessions and matches for boys and girls. Fixtures are played against local schools and we enter boys’ and girls’ county tournaments at U16 and U18 level. Outdoors, Girls’ hockey takes place for all age groups during this term and runs alongside the main girls’ sports of Lacrosse and Netball, with training and matches happening midweek. Girls in 4th year and above, for whom hockey is their main sporting passion, may play in boys teams in the spring term.

To provide further development opportunities to our players, the Hockey Academy (mid-week evening training and holiday hockey camps) runs all year round.

As a result of the expert tuition that they receive, players develop quickly upon joining the school, progressing to a good playing level in the early years. As they move through the school, numerous players go on to play for Surrey and several play for their region in their respective age groups. The hockey programme’s aims are to develop a lifelong love of the sport and to prepare players for this in the best way possible.

Caterham School are now proud sponsors of Oxted Hockey Club’s junior section. Lots of Oxted HC players attend Caterham, creating a strong link between the two programmes and we are excited to see how this partnership will develop over the next few years.

To see regular updates and news from our hockey programme, including information on Hockey Academy camps and sessions, follow us on social media: Twitter- @Caterhamhockey 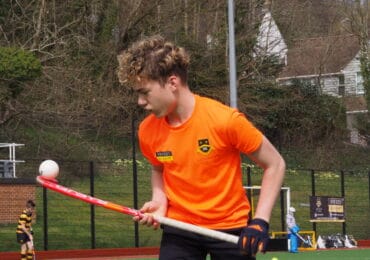